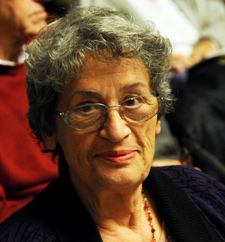 Mirjana Živković graduated in composition at the Faculty of Music in Belgrade in 1964. In school year 1967-68, she stayed in Paris at the postgraduate mastering under Nadia Boulanger and Olivier Messiaen. She completed MA studies in Composition in Belgrade in 1974. Mirjana Zivkovic worked as a professor in the School of Music Josip Slavenski in Belgrade (1964-1976), then as a docent, associate professor and professor at the Faculty of Music in Belgrade, where she retired as a Head of Department of Theoretical Subjects in 2003.

She won several major national and one international award for her compositions. Her opus, in addition to a number of orchestral and choral compositions, consists of chamber works of various genres. She has also written a large number of music theory works and textbooks. For her pedagogical work, she has been awarded a Golden Plaque by the University of Arts in Belgrade (1997), and also won the Lifetime Achievement Award for the Association of Music and Ballet pedagogues of Serbia (2004).