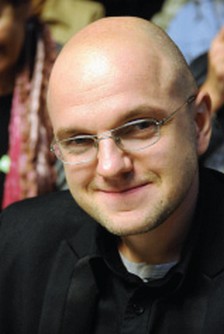 Ivan Brkljačić (1977, Serbia) received his BA (under Srđan Hofman), MA (under Zoran Erić) and PhD (under Hofman) degrees in composition from the Faculty of Music in Belgrade. His pieces have been performed numerous times in Belgrade and Serbia, as well as in Belgium, the Netherlands, Canada, Sweden, Brazil, the Czech Republic, Italy, Austria, Slovenia, Bosnia and Herzegovina, Poland, Germany, Croatia, Macedonia, France, Romania, Hungary and Australia (The World Music Days in Sydney were opened with his composition Jinx, in 2010). Brkljačić composes for the theatre, and in 2012 he wrote a soundtrack for the full-length movie Redemption Street(Ustanička ulica), directed by Miroslav Terzić. He was employed as a professor of Music Forms at the Secondary Music School “Mokranjac” in Belgrade, from 1999. Then, in 2005 he became an assistant at the Department of Music Theory, at the Belgrade Faculty of Music, and in 2010 Assistant Professor at the same Department. From 2007 he has been the selector of the International Review of Composers. He received the “Mokranjac” Award (2005) for his piece When Curtain Rises Seven Times for symphony orchestra, the statuette of the 41st Sofest Festival for best original music for the Redemption Street, and the Annual award of the magazine Muzika klasika for 2012, in the category of applied music (for the same soundtrack).

The assumption that every member of any ensemble brings into that ensemble their whole personality with all the positive and negative traits initiated this composition. Thereby I associated every saxophone with one of four temperament types (in psychology known as choleric, phlegmatic, melancholic and sanguine) and came up with the music content. I associated baritone saxophone with somebody who is angry, livid, bitter, but at the same time energetic, passionate and very ambitious. Soprano saxophone is apathetic, timid and does not show emotions. Tenor saxophone is telling its sad and melancholic story filled with worry and lack of understanding. Alto saxophone is vivacious, extroverted, full-blooded and very excitable. Thanks to their differences every saxophone has the opportunity to create a complex, diverse and harmonious joint sound. This work was composed after the piece McMelanholik from the instrumental theatre work Istar, which was premiered in 2011, and it represents the result of its independence.