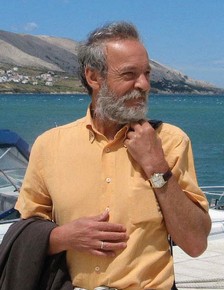 Srđan Hofman (1944, Serbia) acquired his BA and MA degrees in the class of Stanojlo Rajičić at the Academy of Music in Belgrade. He is a retired professor of composition and orchestration at the Faculty of Music in Belgrade but still teaches in its doctoral composition programme. He founded the Faculty’s sound studio. He was a vice-dean and dean of the Faculty and vice-rector of the University of Arts in Belgrade. Apart from composing, he is also active in theoretical work related to issues in contemporary music. His works have been performed at the most prominent Serbian and foreign contemporary music festivals (in Belgrade, Ohrid, Opatija, Zagreb, Bruges, Helsinki, Stockholm) and as part of regular concert repertoires in the Netherlands, Poland, France, Austria, Australia, Great Britain, and the US. He is a co-founder of the International Review of Composers in Belgrade and secretary of Serbia’s national chapter of the International Society for Contemporary Music. He has won numerous awards for his work in composition.

The piece Kroz kutije zvuka I (Through Boxes of Sound I) for clarinet, violin, and piano was written in 2015 on the initiative of the trio Pokret (Movement) and its musical content and dramaturgical flow were shaped by my interpretation of the notion of a music box, which is the theme of this year’s Review of Composers.

I understand the notion of a box as a clearly delineated (and thereby defined) closed space, which we use to store documents, notes, photographs, items… related to a certain purpose or use, or to a given person, event, time period… By contrast, sound travels freely and unpredictably and if it can be ‘captured’ at all, classified, and stored into an ‘allocated’ box of its own, that means it features a characteristic, recognizable singularity (which may refer to a special kind of sound, instrumentation, texture, mode of phrasing, melodic and harmonic content, rhythmic flow, etc.), pointing to a given manner of genre or style.

The work Kroz kutije zvuka I (as well as the diptych, of which it constitutes the first part) rests on a few rather simple motives, which, in their unpredictable, seemingly asynchronous unfolding, occasionally ‘drop’ into boxes formed by different, discretely evoked musical stereotypes. Furthermore, the piece also ends with sound ‘trapped’ inside a real box – a speaker.