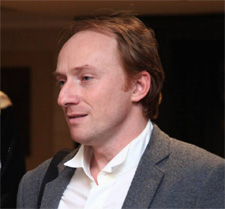 Milorad Marinkovic – composer and conductor, born 1976 in Belgrade. He graduated from the Belgrade University, Faculty of Music, with a double major: in composition (2000) and in conducting (2012). He received his MA in composition (2010), and is currently writing his DMA thesis in the field of spiritual choral a cappella music at the same Belgrade University. It covers the subject of a scenic liturgical cantata, “Nativity kontakion” on lyrics of the famous Byzantine hymn “Today the Virgin” by St. Romanos the Melodist in the Serbian translation by Dr Nenad Ristovic.

His extensive choral opus consists mainly of original works of sacred music written in the style associated with the Serbian Orthodox chanting, but with a modern language, bright expression and a large dynamic range. He has written three comprehensive choral works:

Milorad also composes symphonic and chamber music, in which also has elements of the modern Orthodox musical traditions and folk music of Serbia, the Balkans, and the Middle East, but it is primarily based on the European instrumental practice such as Piano Concerto (2010) and Heroic Overture (1999) for orchestra.

He works as a lecturer in music theory and practice (music analysis, musical styles, arranging) at the Faculty of Philology and Arts at the Kragujevac University (Serbia).

He lives in Belgrade and is married to Mirjana and father of four children.