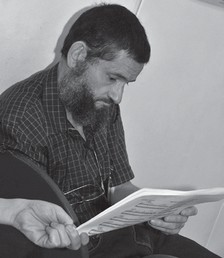 Miloš Zatkalik (1959, Serbia), composer and music theorist from Belgrade, Professor at the University of Arts in Belgrade, Faculty of Music. Visiting professor at the University of Banjaluka (Bosnia and Herzegovina) and formerly at the Universities of Novi Sad and Kragujevac. Lectured by invitation in Canada, Norway, the USA, Slovenia, Germany and Australia.
Major works: symphonic: Minas Tirit: What’s He to Hecuba; of Saralinda, Xingu and the Duke Swallowed by Golem – A Fable for Symphony Orchestra; chamber: The Mad Carriage-greeter from Ch’u; Lost Fragments II; As if Nothing Had Happened; Seemingly Innocent Game; Noise in Inner Silence; chamber orchestra: Dum incerta petimus, Lost fragments; Four Visions of Absence; Four Chromatic Transformations; solo instruments (flute, viola, cello); songs.
As a theorist, presented papers on many scientific conferences and published a number of papers. Research areas: analysis of 20th-century music; relationships between music and literature; psychoanalytic foundations of music analysis. Author of the first Serbian electronic textbook on music analysis.
Member of the University Senate. Formerly a long-time head of the Department of Musc Theory, member of the Composers Association of Serbia Managing Board, representative of the Association in European Composers and Songwriters Alliance, and member of the jury of the Mokranjac Award.
Also holds a degree in English language and literature.

Il mostro meccanico
The monster is, first and foremost, mechanical – lacking feeling and expression – but highly energetic. Only then it can be considered evil as well (evil is perhaps optional). Monster’s mechanicistic energy is also a kind of playfulness. The roles are clearly divided: the monster brings in mechanicalness and soullesness. Impression, expression, sentiment: these are the task (the lot, the privilege) of the listener. The performers are bound by these two extremes.