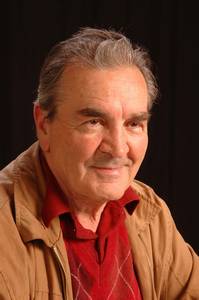 Branko Karakaš, composer, librettist, musicologist, poet, director, critic and translator.
Born 02nd of Mai 1930.g. in  Laki, Mazedonia. General and Musical Education: Military Music School in Zagreb (violin and trumpet), Music High School, studied at the Musical Department of  Pedagogy Academy in Skopje and at the Faculty for Theatre, Film, Radio and Television in Belgrade. He also studied Philosophy at the Philosophical Faculty in Skopje where his Dissertation thesis “Songs as a medium of Propaganda” was approved. The material of this thesis was published in his books “Songs from the partisan column” and “Music on the partisan paths”

Career: as a child, he performed as chorister in the Zagreb opera house; since 1947, musician in the Military orchestra (trumpeter and violinist), occasionally in Philharmonic orchestra and Opera in Skopje; composer and music illustrator for performances of the Dramatic theatre in Skopje; permanent music critic in the daily newspaper “Nova Makedonija”; contributor to a number of professional and other literary and music magazines at home (former Yugoslavia)) and abroad; author of several books of poetry; librettist and author of a large number of poetic texts that were used by many composers by the creation of their musical works.

Lived in Belgrade since 1961; chief for music propaganda and publishing in the Music department of the Ministry of Defence; director or the large number of jubilee and protocol programs on state level; editor in chief of Bulletin of Union of Yugoslav composers, member of the editorial board of the magazine “Pro Musica”, director of the large number of jubilee and protocol programs on state level; scenarist and director of festival of Popular Military Songs and Marches and International Festival of Military Brass Bands “Meetings on Miljacka” in Sarajevo (over 70 military orchestras from the whole world); as colonel in the military music service, he worked as the director of the Artistic Ensemble of the Yugoslav Army since 1981; composer and co-director of the Opening of Mediterranean Games in Split and Winter Olympic Games in Sarajevo; on field-trips and tours he visited more than 30 countries; from 1990, he has been working as a freelance artist; in the last decade he has been living and working mostly in Vienna

Most important publications: Anthology of Post War Macedonian Poets 1960, “Macedonian Composers” 1970, “National Anthems of the World” 1971, “History of Music in the Yugoslav Army 1945-1985” 1987, “Anthology of Macedonian Folk Songs” 1995, “Songs with the Taste of Tear Gas” 2001, “Anthology of the Folk Songs of Montenegro” 2006, 17 collections of poetry, 93  musical collections with about 10.000 songs of various contents, over 200 poetic texts and librettos for different musical works, among them a libretto for the first youth-rock-opera “Ho-Ruk” by the composer Djelo Jusić, opening performed in Zagreb, Cantata “In the Name of Homeland” by the composer Krešimir Baranović and oratory “Epic Poem about Freedom” by the composer Boris Papandopulo, bought  opening performed at the Dubrovnik Summer Festival; 26 translations of Macedonian literature and over 30.000 verses translated from Macedonian and Russian.

Most Important Contributions to Magazines, Reviews and Journals: author of more than 700 reviews, articles, comments, essays, critics, research and professional papers in over 50 magazines, reviews journals and professional publications within the country and abroad.

Winner of a number of domestic and foreign rewards and acknowledgements among which the Federal Reward “The 4th of July”, as well as 57 rewards at numerous competitions and musical festivals in the country an abroad. He is one of the foreigners who have been rewarded with the Great Medal of the USA “Spirit of 76” on the 200th anniversary of the establishment of the USA.