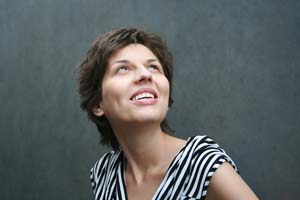 Milica Djordjević (1984, Belgrade, Serbia) graduated composition from the Faculty of Music in Belgrade in the class of Isidora Žebeljan, where she also finished studies of Sound and Music Recording and Production. She finished postgraduate specialist studies in composition at Conservatoire National de Region de Strasbourg in the class of Ivan Fedele (2007-2009) and graduated with honors. She continued her professional accomplishments in Paris, where she was enrolled in composition and computer music Cursus1 at IRCAM (2009-2010).
Currently, she is on postgraduate studies at HfM Hanns Eisler in Berlin, in the class of prof. Hanspeter Kyburz.

Djordjević’s compositions include works for symphony orchestra, solo instruments, vocal and chamber ensembles and electronic music.
She is also active as project/concert organizer in Serbia and Germany. Djordjević is one of the founders (and formerly executive producer) of KoMA festival, held annually in Belgrade. Since 2011 she is member of Klangnetz association in Berlin.

She has been awarded numerous prizes and scholarships (First Prize at the ISA05 for the composition SIVO [Gray], the Third Prize at the 12th YCM Apeldoorn for the composition Opsena nigdine, Minotaur, ili šta? [Mirage of Nowhere, Minotaur of What?], Prize of the City of Strasbourg 2008, Finalist of the StaubachPreis competition in Darmstadt 2008, selected for the ISCM World New Music Days 2011, represented Serbia at the International Rostrum of Composers 2010, etc.)
She was awarded the Scholarship for talents of the Serbian Government in 2008.

She lives and creates in Berlin.