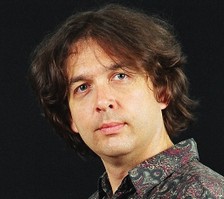 Ivan Božičević (1961, Serbia/Croatia) is a composer, organist, arranger and jazz musician. He mastered composition at the Belgrade Faculty of Music with A. Obradović and specialized new music at the Darmstadt International Summer Courses for New Music. He also studied organ at the Frankfurt Music Academy with Edgar Krapp and specialized in early music at the Salamanca University with Guy Bovet and Montserrat Torrent. Until 2001 Božičević worked at the Belgrade Faculty of Music and Art Academy in Novi Sad as a professor of counterpoint, analysis and harmony. Since 2002 he has worked in Split, Croatia, as a free-lance artist and he runs the jazz band SplitMinders. Božičević’s opus encompasses symphonic, orchestral, chamber, choral and solo pieces, as well as numerous electronic compositions. He is interested in a variety of genres (early and baroque, electronic, jazz, world music) and the possibility of “cross-fertilizations” between those genres, always aiming at the stylistic amalgamation on a deeper level. His pieces are published on 15 CDs and performed all across Europe and the USA. Božičević received awards for his compositions in Serbia, Croatia, the United Kingdom, the Czech Republic and the USA (ArtsLink Fellowship Award, “Garth Newel” Prize, “Anton Stadler” Award, Aliénor Award, Third Millenium Ensemble Prize, Prague Philharmonic Choir Award, AGO/ECS Publishing Award, Manhattanbeachmusic Award). He is one of the founding members of the Splithesis ensemble for new music in Split, Croatia. As organ recitalist, Božičević performed in Germany, Spain, Switzerland, the USA, Serbia and Croatia. He is active as a jazz musician and appears with Croatian bands SplitMinders, Partet, and Waveform.

This composition draws its inspiration from the famous “departing spring” haiku by the great Japanese master Matsuo Bashô (1644–1694):

yuku haru ya / Spring passes
tori naki uo no / and the birds cry out – tears
me wa namida / in the eyes of fishes.
Bashô / (transl. S. Hamill)

Spring passes has two movements. In the first, Adagio dolente, I demand a “zen-like” attitude of the performers – they should be free and expressive without giving the impression of wanting to be free and expressive. The tempo should flow, but the music should sound as if suspended in time. The second, Con moto movement will thrive on the utmost precision, rhythmical impetus and careful accentuation of various interconnecting lines. The overall effect should again amount to a suspension of time – but now it will be achieved through the hypnotic minimalistic drive. The composition was originally written for string quintet and piano 4-hands, according to the rules of the international project Invitation to Composers, for which this work was chosen. It was premiered in June 2011 in London by the London Schubert Players, and later appeared on their CD Enesco’s Farewell. Following up on the request of LP duo, it was a great pleasure to make this two-piano version that was further recorded by LP Duo and published on CD Belgrade New Classics. Soon after, Sonja and Andrija arranged the composition for analogue synthesizers and electronic drums.