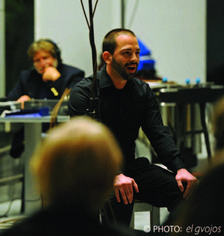 Draško Adžić (1979, Serbia) graduated at the Faculty of Music in Belgrade, at the Department of Composition and Orchestration, in the class of Prof. Isidora Zebeljan. He currently attends doctoral studies at the same faculty and department, and works as a teaching assistant at the same time. His music pieces have been performed in Serbia, Macedonia, Croatia, Austria, Czech Republic, Belgium, Holland and England. He has taken part in significant European music festivals like Gaudeamus Music Week, ISA PragWienBudapest, Music Biennale Zagreb and BEMUS. He often composes for the theatre, TV and films, and his applied music pieces have been heard at the following festivals: Fest, Bitef, Sterijino pozorje, MESS, Cinema City and Maifestspiele Wiesbaden. In 2012 he received the Sterija Prize for original theatre music for the play “Workers die singing”. He has also performed as a pianist, singer and conductor, performing his own pieces and pieces by other composers. He is occasionally employed as the organizer of concerts of contemporary music.

Wool, needle, string, bones, three Vlach spells (basme)for flute and piano are actually three pieces for three imaginary magical rites. They have a dancing character because dance is an integral part of pagan rituals. According to the harmonic and rhythmic features they evoke the music of Eastern Serbia. The seemingly random nouns listed in the title are the most common Vlach magic props. The composition was written for Neda Arsenijević.