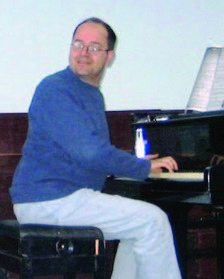 BBožo Banović (1963, Serbia) graduated from the Department of Composition and Orchestration at the Faculty of Music in Belgrade (studied with Prof. Rajko Maksimović and Prof. Vlastimir Trajković). His pieces were performed at previous International Reviews of Composers (in 1995, 1997, 2010, and 2011), “Obzorja na Tisi” in Novi Bečej, Guitar Open Festival in Subotica, as well as in Slovenia, Italy, RSA and Russia. He teaches and performs as a piano accompanist.

Two pieces for wind quintet – I have always considered wind quintet, because of timbre differences, as well as technical and idiomatic distinctions between the instruments, an ensemble of jovial and spontaneous music making. The piece was created in the first half of this year, and the movements are called Allegro and Andante. Taking into consideration that the process of composing can hardly be defined as spontaneous, I hope that the composition has kept some of the previous declarations.