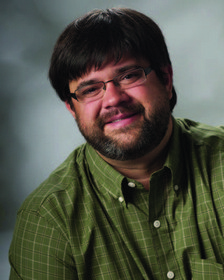 Jason Bolte (1976, USA) is an Assistant Professor of Music at Montana State University where he teaches courses in composition and music technology. He is a member of the organizational board of the Electronic Music Midwest Festival, and a founding board member of the Kansas City Electronic Music and Arts Alliance. He holds a D.M.A. in Music Composition from the University of Missouri – Kansas City Conservatory of Music and Dance. A composer of acoustic and electro-acoustic music, his work has been performed throughout the United States, Europe, South America and Asia and has received awards and recognition from organizations around the world. Jason’s music is available on the Vox Novus and Miso Records labels.

And Death… for fixed media is a short piece inspired by the poem “And Death Shall Have No Dominion” by Dylan Thomas. And Death… is an elaboration of the poem, taking the ideas presented and inferred and infusing them into the sonic realm. Many of the sounds that are used in the composition are specifically mentioned in the poem and create a direct connection between the two works. These sounds are also used to capture my interpretation of the poem through concrete usage as well as constructing textures and gestures that are related to the emotional contour of the poem. And Death… was selected as one of three Prize Winners at the 9th Electroacoustic Composition Competition Música Viva 2008 (Portugal).