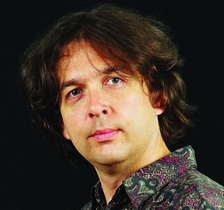 Ivan Božičević (1961, Serbia/Croatia) is a composer, organist, pianist. He studied composition at the Faculty of Music in Belgrade with Prof. Aleksandar Obradović, and attended Darmstadt International Summer Courses for New Music. He finished his organ studies with Edgar Krapp at the Frankfurt Music Academy, and also early music studies in Salamanca with Guy Bovet and Montserrat Torrent. His works have been published on 14 CDs, and performed in Europe and the USA. Božičević received the ArtsLink Award in 2009. In 2011 he won the Garth Newel Composition Competition in Virgina, USA (Monkey Face for piano quartet) and received the “Anton Stadler” Award in London (Raven’s Pass for basset clarinet and piano). In 2012, Airborne for clarinet and string quartet won the second prize at the Third Millenium Ensemble Composition Competition (Washington, USA); Microgrooves for solo harpsichord was awarded in the solo category, while Alienor Courante for soprano, cello and harpsichord was awarded in the chamber category at the Alienor Harpsichord Composition Competition (Cincinnati, USA). His composition Marittimo from 2010 will be issued on a CD by the British Nimbus Alliance company.

yukuharuya Spring passes
tori naki uo no and the birds cry out – tears
me wa namida in the eyes of fishes.
Bashô (transl. S. Hamill)

The structure ot the ensemble was determined by the rules of the international project Invitation to Composers, for which this work was chosen. It was premiered in June 2011 in London by the London Schubert Players, and the composition later appeared on their CD “Enesco’s Farewell”. Spring Passes – in the version for eight-part choir and piano four-hands – won the 2012 Prague Philharmonic Choir Composition Competition. This success was achievied out of 150 competing works. This renowned ensemble will premiere and record this version of Spring Passes in Prague during the next concert season.