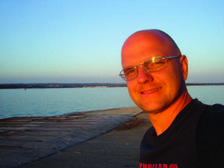 Ivan Brkljačić (1977, Serbia) graduated and received his master’s degree from the Department of Composition of the Faculty of Music in Belgrade. He completed PhD studies in composition at the same faculty on October 23th 2012. His pieces were performed in Serbia, Romania, Hungary, France, Macedonia, Germany, Poland, Slovenia, Austria, Italy, the Czech Republic, Sweden, Brazil and Australia. Ivan Brkljačić composes for the theater and some of the theater houses he has worked for are: “Raša Plaović” Scene, Atelje 212, “Duško Radović”, Zvezdara Theater, Belgrade Drama Theater, Yugoslav Drama Theater, “Pino­cchio” Puppet Theater. He has composed theater music in Zrenjanin, Vršac, Subotica, Banjaluka, Podgorica, Budapest and Erlangen, Germany. In 2012 he wrote a soundtrack for the full-length movie Redemption Street, directed by Miroslav Terzić. He works as assistant lecturer at the Department of Music Theory at the Belgrade Faculty of Music. He was awarded “Mokranjac” Award (2005) for When Curtain Rises Seven Times for symphony orchestra and the statuette of the 41st Sofest Festival for best original music, for the Redemption Street.

Couvadein some cultures represents a practice where a man, while his wife is with child, imitates her pregnancy. In medicine it is known as couvade syndrome and means that partners of pregnant women share many of their symptoms and go through changes similar to those characteristic of pregnancy (mood swings, cravings, cramps etc). It is estimated that this syndrome affects at least 10 per cent of pregnant women’s partners. It can be an unpleasant experience which consequently causes a number of comical situations. This composition, organized in the form of one movement, gives the sound imagination of the psychological condition of couvade, with the spectrum of the most diverse associations which refer to possible situations a man can find himself in during couvade. The composition is dedicated to the trio Pokret.