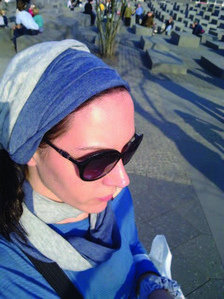 Ana Gnjatović (1984, Serbia) graduated in 2008 from the Department of Composition and Orchestration at the Faculty of Music in Belgrade with Prof. Milan Mihajlović. She attends doctoral studies at the Department of Composition at the Faculty of Music in Belgrade in the class of Prof. Srđan Hofman. Ana Gnjatović attended courses and workshops in composition, improvisation and vocal workshops with George Aperghis, Brian Ferneyhough, Trevor Wishart, Julia Wolfe, Mark André, Georg Friedrich Haas, Louis Andriessen, Chaya Czernowin, Luca Francesconi, Ivan Fedele… Her pieces were performed in Serbia, Montenegro, Croatia, Germany, Austria, Hungary, Holland, FYR Macedonia, Italy, Denmark, the USA and were selected for festivals such as: KoMA, International Review of Composers, Days of Mokranjac, Harpsichord – Live Art, Espressivo (ME), International Harp Festival – Harp Connection. She was awarded prize of the “Josip Slavenski” Fund of the Faculty of Music in Belgrade (2009), special award and commission by the  Sentieri selvaggi ensemble (Milan, Italy) for 2008/2009 season and Summer academy Prague-Vienna-Budapest award in 2005.
She is employed at the Faculty of Arts in Zvečan and Faculty of Music in Belgrade. Sometimes she sings in public.

Casual notes<(2012) for Milana Zarić. The inspiration and pre-text for the composition Casual notes came from J. S. Bach’s Suite for Lute in C minor and its performance by Milana. The relationship with the existing music text is different from that which I utilized in previous compositions. Instead of disassembling the pieces, reading/writing the existing work in a different way, I added, enhanced and later on, inserted. So the pre-text, Bach’s composition, remains in fact a text for itself, which during performance, intertwines in certain places with the Notes, and later continues its flow. Casual notes are short, periodical, and often focused on ideas that weren’t available to Bach, such as the sound of today’s harp.