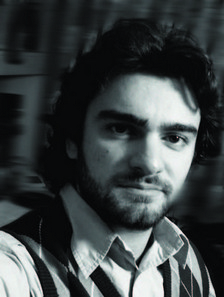 George Christofi (1962, Cyprus) completed his PhD in Composition in 2009 at the University of York. He was an active participant at several composition workshops including ACANTHES (2006-2008), the 18th Voix Nouvelles of the Fondation Royaumont among others. He has been working at the Music Department of the European University Cyprus teaching Composition, Harmony and Orchestration.  Soloists and ensembles that performed his works include: L’ Opéra National du Rhin, Bass Clarinet player Harry Sparnaay, Cellist Rohan de Saram, Jeunes Voix du Rhin, Ensemble Musiques Nouvelles, Orchestre National de Lorraine, The Endymion, The Kreutzer Quartet, Ensemble Cairn, Ensemble SHADOW PLAY, Ensemble Berlin PianoPercussion among others. Recent commissions include works for the Flutist Mario Caroli, the Soprano Sarah Leonard, the Trio IAMA and the European Contemporary Orchestra. Christofi’s music has reached audiences in Belgium, Cyprus, England, France, Germany, Greece, Italy, Japan, Korea, Spain, and the U.S. and has been broadcast on BBC Radio 3.
Diplophonia for solo flute.  The term diplophonia (διπλοφωνία) is formed from the words ‘διπλός’ (double) and ‘φωνή’ (voice) and it is defined as the dysfunction of the voice where the vocal cords produce more than one pitch at the same time. This bilinear concept was the catalyst to begin working on the central idea of the piece. Regardless of the fact that Diplophonia is a piece for solo flute, it is scored in two staves: one for the flute and the other for the voice. The part of the voice in this context is not to be heard as a separate line but, on the contrary, it has an organic role in enhancing the sound palette of the instrumental writing. Hence, the player in Diplophonia has to use the voice fused with the instrumental playing and has to sing, whisper, speak and shout through the flute’s mouthpiece.