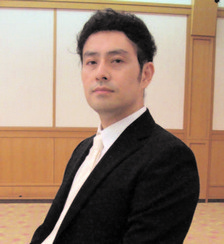 Hideki Kozakura (1970, Japan) who has been residing in Nagoya, Japan since 2009, after many years of staying in Stockholm and Berlin, leads a professional life both as a pianist and a composer. Having received both Bachelor and Master degrees from the Tokyo University of Fine Arts, he studied for a year in New York under the Japanese Government Overseas Programme. He received his second Masters degree in composition from the Royal College of Music in Stockholm.
His pieces have been performed by leading musicians and orchestras in many parts of Japan, Europe and North America.

Que es lo que oigo / That Is What I Hear for piano trio, premiered in Tarragona in 2011 by Tri@ngle trio. The work is in three movements and each movement has its own particular character. In order to give you a clear picture, the following titles are given: