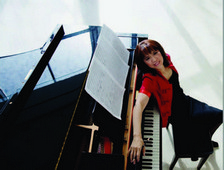 Alexina Louie (1949, Canada) is one of Canada’s busiest composers. Her orchestral works have been conducted by such eminent musicians as Sir Andrew Davis, Leonard Slatkin, Charles Dutoit, Pinchas Zukerman, Kent Nagano, Gunther Herbig, Ingo Metzmacher among others. Her major theatrical works include The Scarlet Princess, a full-length opera with libretto by Tony Award-winning playwright David Henry Hwang (M. Butterfly) commissioned by the Canadian Opera Company and premiered in concert (2002). Recently she completed Pursuit  - Concerto for String Quartet and Orchestra, for The Tokyo Quartet and The Toronto Symphony. Her works have been performed and broadcast internationally in Beijing, Shanghai, Belgrade, Zagreb, Vienna, London, Paris, Brussels, Singapore, Helsinki, Stockholm, Dresden, Amsterdam, New York etc. Ms Louie’s made-for-TV comic opera Burnt Toast won the best film award at the prestigious 2005 Golden Prague International Film Festival. She was named an Officer of the Order of Canada, the country’s highest civilian award and most recently received the Queen’s Diamond Jubilee medal. A freelance composer living in Toronto, Canada, she continues to be busy with commissions and her work for film, television and dance.

Echoes of Time. The specific request to compose a work as the companion piece for Messaien’s Quartet For the End of Time offered me the opportunity to pay homage to a composer who I greatly admire. The emotional darkness of the prisoner of war camp which was the site of both the composing of the work as well as its premiere before fellow prisoners, is conveyed at the outset by dramatic cello utterances as well as those of the piano. The pianist is instructed to strum the strings violently with the fingernails of the right hand. Listeners who are familiar with the Quartet, may recognize fragments of the work which
I used as jumping off points. Paying homage to a great work while staying true to my own musical voice was an interesting challenge. Echoes of Time concludes with resonances of the unsettling music which opened my piece folded into a fragment of the timeless, lyrical fifth movement of the Quartet. Art transcends the darkness.