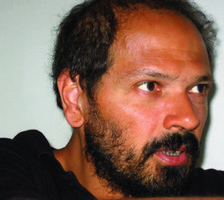 Marco Lombardi (1959, Italy) – After receiving his degree at the Conservatory of Genoa he followed summer courses at Accademia Chigiana in Siena, with Franco Donatoni. His compositions are published by Pizzicato Verlag Helvetia. He has been awardeed in several composition competitions and his music is performed in Italy and abroad by prestigious ensembles. He deals with musicological research particularly in ­modern and contemporary music. He is the founder and artistic Director of Ensemble Nuove Musiche.

Texture positivo/Texture negativo was composed during May and June 2009, for a concert organized by Italian Society for Contemporary Music focused on the relationship between music and visual art. My compositions are inspired by two acrylic works of the Italian painter Fiorenzo Corona (1928–2001) – Texture, positivo (1980) and Texture, negativo (1981). Here I used some materials of my Sinfonia Concertante for orchestra with solo cello composed in 2008. Altough I studied cello, this is my only work for solo instrument. It was premiered on 29th september 2009 by a German cellist, Ulrike Brand. It is a quite short and virtuosic piece in a single movement but with clearly recognizable sections in which the performer can show all his own skills.