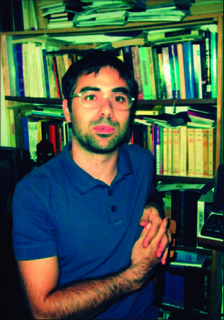 Đorđe Marković (Serbia) studies composition at the Art Academy in Novi Sad, the class of Prof. Zoran Mulić. He is the founder of various experimental bands in which he explores sound organization, unconventional usage of conventional instruments and collectively creative process. For a number of years he worked as a journalist for a daily newspaper “Gradjanski list” and was a part of the editorial staff for music at Radio Novi Sad. He completed his studies of philosophy. Occasionally, he works as a journalist and writes essays on music. He is the recipient of ”Rudolf Bruči” Award of the Art Academy in Novi Sad.
Selected works: String Quartet no. 1, Piano Trio no. 1, Wind Quintet no. 1, Five Preludes for guitar, Pulsar for two guitars, Pulsar for piano, … for 13 strings, … for choir, Figure A for electronics, Berešit, play for twelve singers, Re-Cycle Cage, composition for vibraphone, four to six radios, and four electric guitars.

That love, a song for baritone, piano and kalimba, was written to the lyrics of Jacques Prévert, or to be more exact their translation from French by Miroslav Karaulc. As in many of Prévert’s poems, the poetic structure in this one also rises by a slow weaving of a kind of declamatory narrative, whose main vehicle of expression rests on a musical and associative parameter. Its musical flow is realized as a gradual, nicely graded crescendo, which is at the same time a fundamental task a text like this puts before a composer who aims to provide the sound for it without adding (or taking away) anything. Therefore, music is completely derived from text. Its formative principle, as has already been stated, is a long and gradual growth which ends in an explosion so to speak, the last lines pronounced on its brinks as the key to the unity of the flow. Sections of voice and piano are presented in dynamically synchronized but opposite directions in register, whereas the part with kalimbra is a separate musical time which becomes prominent at the endings of the piece, thus making it whole.