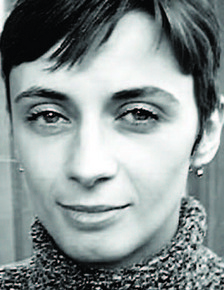 Tatjana Milošević (1970, Serbia) received her BA and MA degrees from the Department of Composition at the Faculty of Music in Belgrade, in the class of Prof. Zoran Erić, and she works as a Lecturer at the same department. She received further training at master classes with Ligeti, Penderecki, Ferneyhough, Stockhausen, Andriessen and others. She collaborated with renowned ensembles such as Het Trio (Holland), De Ereprijs (Holland), Creo (USA), Intercontemporain (France)… Her compositions have been performed at important festivals and concerts of contemporary music in almost every country in Europe, USA, South Korea and in our country. She stayed at The Old Dominion University in Norfolk in 2001 as a visiting professor. That same year she participated in a multimedia project Waterproofby UNESCO, where her electronic composition Tribute for Fort Honswijk was performed and recorded on CD.  She was commissioned a ballet CoinciDance from Dansacademie Arnhem, which was performed at theGroeten uit Arnhem festival by the ensemble De Ereprijs. In 2009, she was a lecturer and a member of the jury at the “15th Young Composers Meeting” in Apeldorn. She is the recipient of many foreign and national prizes.

Two faces. Eternal recurrence is an infinite return which swallows all finiteness and brings it back into itself. According to Nietzsche, in that sense, the relation between the will for power and eternal recurrence is the relation of finiteness against infinity. We have already determined the concept of infinity in his philosophy as constant repetition. Immediately, some questions are raised; how did Nietzsche understand the concept of constancy, how did he conduct his study on the eternal recurrence? To better explain the problem we will examine a famous extract from the book Thus Spoke Zarathustra: “On the Vision and the Riddle”.  Nietzsche confronts the dwarf’s leaden thoughts with his “abysmal thought”.
“Behold this gateway! Dwarf!” I continued:“It has two faces. Two paths meet here; no one has yet followed either to its end. This long lane stretches back for an eternity. And the long lane out there, that is another eternity. They contradict each other, these paths; they offend each other face to face; and it is here at this gateway that they come together. The name of the gateway is inscribed above: ‘Moment.’”
With this, Nietzsche clearly points at the infinity of both time paths, the one that stretches back (for an eternity) and the lane that goes forth (another eternity).  An infinite amount of time has passed until now, and another infinite amount stands before a man. According to Nietzsche’s concept of time, a starting point is a part of linear time that stretches back and forth, he points at the double eternity of time. Eternity or infinity of the past shows that everything that can happen must have already happened, it cannot be completed. Likewise, eternity or infinity of the future requires going through everything that has already happened in the past. In that respect, Nietzsche stresses that there is nothing new in nature or human history. The world is an endless chain of same events recurring an uncountable number of times.