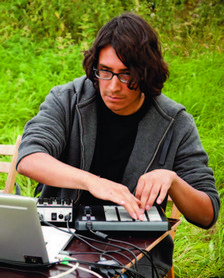 Alejandro Montes de Oca (1980, Mexico) is a composer, performer and sound artist. Inspired by the physical materiality of sound, our contemporary soundscape and different time perceptions, he focuses on organizing sounds in space and time with the use of self-made electroacoustic instruments and applications.
He received a master’s degree in electroacoustic composition from the Royal School of Music in Stockholm. He studied computer music and media electronics in Vienna, and followed the ECMCT (European Course for Musical Composition with Technologies) Helsinki-Barcelona program, organized by the IRCAM. He has received commissions from the Instrumental Festival (Mexico), IMEB (France), CDMC (Spain), ICST (Switzerland) and Turku 2011 – European Capital of Culture, as well as scholarships from the UNESCO-Aschberg, FONCA, the Cultural Minister of Spain and the Swedish Performing Rights Society. He was awarded at the 10th Electroacoustic Composition Competition Musica Viva, the Franz Liszt Stipendium 2011, the 10th Luc Ferrari Competition and the EAH Water Soundscape Composition Contest. His music has been released on various compilations and has been presented at different festivals and concerts in Europe and America.

Cracked Voices /strong>are electroacoustic compositions based on the one-act play called Krapp’s Last Tape by Samuel Beckett. While reading this beautiful play, I was fascinated by two things; the sound allusions and descriptions, as well as the temporal logic used by Beckett, moving forward and backwards in time. I have tried to incorporate these ideas into a music composition of my own. The temporal logic used in the theater piece was a starting point for me to explore different kinds of musical time concepts and musical form structures. The piece Cracked voices does not attempt to represent the theater play by Beckett, but rather tries to explore our sound world and our time concepts. It is a journey amongst memories that, in this case, are sound memories.
Commissioned by the IMEB (Institut International de Musique Electroacoustique de Bourges). Music realized in the Studio Circe, IMEB and the Studio A, KMH (Royal College of Music in Stockholm).