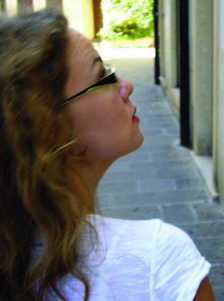 Branka Popović (1977, Serbia) graduated from musicology and composition departments (studying with Zoran Erić) of the Belgrade Faculty of Music. She obtained her Master of Music in Composition at the Guildhall School of Music and Drama in London studying with Judith Bingham. She stayed for another year at Guildhall as the Composition Fellow. Currently she is finishing her doctoral studies in composition  at the Faculty of Music in Belgrade (with Zoran Erić). Her pieces were performed at: International Review of Composers, Belgrade; Birthwistle festival (London), Brass Spectacular (Glasgow); City of London festival, and KoMA festival. She participated in the project of the pianist Stephen Gutman What Strikes the Clocke? within the Sir Harrison Birtwistle Festival in 2004 (London, Southbank Centre) with the composition Alarmclock  for clarinet, piano, and percussions; then, at the Park Lane Group Young Composers’ Symposium (London, 2006) with the composition Behind Closed Doors for violin and piano; composition for mixed choir Lorem ipsum was selected at the competition organized by John Armitage Memorial Trust, as one of four compositions performed by The BBC Singers within the workshop dedicated to new choir music. In 2002 she was awarded for the trio Dram (I.S.o.F) at the Summer Music Academy Budapest-Prague-Vienna. She won the prize for best movie music for Tačka prekida (dir. by Igor Toholj) at the 56th Festival of Documentary and Short-meter film (Belgrade, 2009).