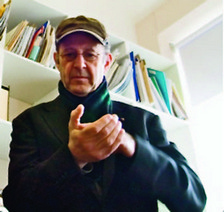 Steve Reich (1936, USA) graduated with honors in philosophy from Cornell University in 1957. For the next two years, he studied composition with Hall Overton, and from 1958 to 1961 he studied at the Juilliard School of Music with William Bergsma and Vincent Persichetti. Mr. Reich received his M.A. in Music from Mills College in 1963, where he worked with Luciano Berio and Darius Milhaud. During the summer of 1970, with the help of a grant from the Institute for International Education, Mr. Reich studied drumming at the Institute for African Studies at the University of Ghana in Accra. In 1973 and 1974 he studied Balinese Gamelan Semar Pegulingan and Gamelan Gambang at the American Society for Eastern Arts in Seattle and Berkeley, California. From 1976 to 1977 he studied the traditional forms of cantillation (chanting) of the Hebrew scriptures in New York and Jerusalem.
In 1966 Steve Reich founded his own ensemble of three musicians, which rapidly grew to 18 members or more. Since 1971, Steve Reich and Musicians have frequently toured the world.
In 1990, Mr. Reich received a Grammy Award for Best Contemporary Composition for Different Trains as recorded by the Kronos Quartet on the Nonesuch label. He won a second Grammy award in 1999 for his piece Music for 18 Musicians, re-mastered work, also on the Nonesuch label. In June 1997, in celebration of Mr. Reich’s 60th birthday, Nonesuch released a 10-CD retrospective box set of Mr. Reich’s compositions, featuring several newly-recorded.
He was awarded the Schuman Prize from Columbia University (2000), the Preamium Imperial award in Music (Tokyo, 2006), The Polar Prize from the Royal Swedish Academy of music (2007), the Pulitzer Prize in Music for his composition Double Sextet (2009).
Over the years, Steve Reich has received commissions from: the Barbican Centre London, the Holland Festival, San Francisco Symphony, Vienna Festival, the Brooklyn Academy of Music for guitarist Pat Metheny, West German Radio, Cologne, Betty Freeman for the Kronos Quartet; the Festival d’Automne, Paris, for the 200th anniversary of the French Revolution, etc. His music has been performed by major orchestras and ensembles around the world, including the London Symphony Orchestra conducted by Michael Tilson Thomas, New York Philharmonic conducted by Zubin Mehta; the San Francisco Symphony conducted by Michael Tilson Thomas; The Ensemble Modern conducted by Bradley Lubman, The Ensemble Intercontemporain conducted by David Robertson, the Schoenberg Ensemble conducted by Reinbert de Leeuw; the Saint Louis Symphony conducted by Leonard Slatkin; the BBC Symphony conducted by Peter Eötvös; and the Boston Symphony Orchestra conducted by Michael Tilson Thomas, etc.

Eight Lines for chamber orchestra (1983). Eight Lines is structured in five sections, of which the first and third resemble each other in their moving piano, cello, viola and bass clarinet figures, while the second and fourth sections resemble each other in their longer held tones in the cello. The fifth and final section combines these materials. The transitions between sections is as smooth as possible with some overlapping in the parts so that it is sometimes hard to tell exactly when one section ends and the next begins.
In the first, third and fifth sections there are somewhat longer melodic lines in the flute and/or piccolo. This interest in longer melodic lines composed of shorter patterns strung together has its roots in my earlier music as well as my studies in 1976-77 of the cantillation (chanting) of the Hebrew Scriptures.