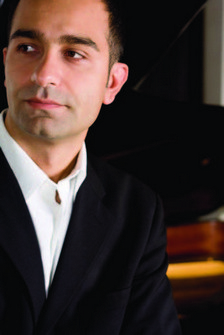 Aleksandar Simić (1973, Serbia) – His oeuvre includes a number of pieces for all standard ensembles – from music for solo instruments accompanied by a piano, to trios, quartets, choral music, music for string and symphony orchestra, to piano concertos and vocal and instrumental pieces.

He is the founder of the Serafimi Ensemble (2006) which performs his chamber music and presents it to a wider audience through live concerts and a number of radio and TV recordings. His music was commissioned by the representatives of Russia, Vatican and the United Nations. He also composed music for the theatre, films, TV and international sports competitions. Other than his music, the audience knows him for his social engagements in the field of inter-religious dialogue and numerous charity actions which he participated in or initiated, such as the campaign for free cultural content dedicated to the elderly, needy and the handicapped called Notes from the Heart.

Dresden Quartet. I was on my way to a rehearsal and some friends were waiting for me at the Carl Maria von Weber Academy. When I stepped out of the house, music started playing in my head, different from the music we were preparing. I hadn’t yet reached Wettiner Platz, but all the themes and sections had been arranged orderly in my head. A few weeks later, when the composition was done, I named it Dresden Quartet.