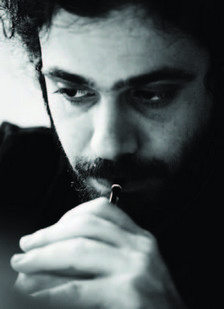 Andys Skoridis (1983, Cyprus) liked music from the time he was a child, but he didn’t really enjoy learning it until the moment he started playing electric guitar and composing songs for his bands “Off Tone Thieves” and “Spirits”.  He had to serve the army when he was 18, but he was lucky enough to join the military band in Cyprus, playing the euphonium. At the age of 20 he left Cyprus and went to the USA to study jazz guitar, but soon he switched to composition and film scoring, studying with great people such as Vuk Kulenović and Tibor Pusztai at Berklee College of Music, from where he graduated in 2007. He then began coming closer to home with a long stop in Amsterdam where he was fortunate enough to meet more great people like Richard Ayres and Wim Henderickx, with whom he studied composition and gained his master’s degree in 2011, but also Rafael Reina with whom he studied Karnatic music for 4 years.
So far, he has been the recipient of various scholarships including WWIK artist’s
subsidy from Kunstenaars & Co – The Netherlands (2010 – 2012), A.G. Leventis
Foundation Music Scolarship – Cyprus/France 2010 – 2011 and Nikolas Economou
Foundation Music Scolarship 2009 – 2010(Cyprus). He has also been awarded the BUMA Toonzetters Prize 2012 (one of the highest composition prizes in The Netherlands), the 1st and 2nd place in competitions for symphony orchestra held by the Cyprus ministry of Culture and Education in 2012 and 2010, and he has also been nominated for the Gaudeamus Prize 2012.
He composes music for acoustical instruments, and plays percussion with “Payazen”,
any available instrument with “Brain Masturbation” and he enjoy playing Javanese gamelan music a lot. At the moment he is living in Amsterdam.

So we commence…where? – To finish, we need to start… to start, we need to finish… if we don’t start… we don’t finish… so… where are we? (Cyprus)