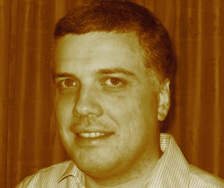 Nicola Straffelini (1965, Italy) studied piano with Temenushka Vesselinova and composition with Armando Franceschini. In 1993 he took the specialization diploma in Composition at Accademia Nazionale di Santa Cecilia in Rome. His teachers were Franco Donatoni at Siena’s Accademia Chigiana and Sandor Veress. He won the 1985 Rassegna internazionale di composizione pianistica  in Rome and the first international composition prize Musica Riva in 1986. He was finalist at Ad referendum, the prize of the SMCQ in Montréal in April 1996 with Nessi. He won the 1998’s Premio Valentino Bucchi in Rome with Ilinx. His music was performed in several Italian and foreign cities and spreaded by radio and television. His pieces recorded on CD are, among others, the quintet Un canto perduto, the trio Arabesco and the cantata Dies natalis. In 2004, his opera La leggenda dei rododendri was performed.

In this little opera the classical love duet, presented in a paradoxical situation, returns. At the beginning Wendy and Murphy are walking in a desert, under a raging sun, playing a childish game. A long crescendo leading to the climax, when she is wrong and the protagonists start to quarrel. The dialogue continues, more and more dementedly, up to the attempt to resume the beginning and is interrupted by a surprise. After the reconciliation, the composition ends with the resumption of the game similar to the initial one.