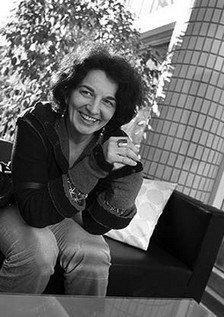 Jovanka Trbojević (1963, Serbia/Finland) attended primary and secondary schools in Belgrade. At the same time she finished primary and secondary music schools “Mokranjac”, the Department for Piano in the class of Prof. Radojka Jovičić-Milosavljević. She studied piano at the Music Academy in Prague, in the class of Prof. Dagmar Valoghova (1981–86). From 1987 she received advanced training at Sibelius Academy in Helsinki, and from 1989 to 1997 she was a full-time student of composition at this school. During this period she worked as a piano teacher in music schools in Helsinki. Since 1997, she has worked as a free-lance artist, focused exclusively on composing. She holds a fellowship by the Finnish government. She lives in Helsinki.

Ristretto, for flute and piano, is a kind of new direction in my output. Spectral and minimal influence is obvious in this piece. I was interested in ‘sonorous’ flute, which would accompany the ‘ever moving’ minimal theme in piano – theme, which I used in various pieces and to which I am always coming back with some new ideas. I was also interested in fantasy and suggestive moods. I spent the spring of 2011 in Rome, as a composer in residence of the Scandinavian house, and since I wrote the piece during this time I wanted to give it an Italian name. After so many suggestions by friends and colleagues, I ended up on Ristretto since I felt there is something in common with the name and the piece. Maybe it is that the resultant shot of ristretto (which is a very ‘short’ shot of espresso coffee) could be described as bolder, fuller, with more body and less bitterness. All of these flavors are usually attributed to espresso in general, but they are more pronounced in ristretto.
Hopefully in my Ristretto too!