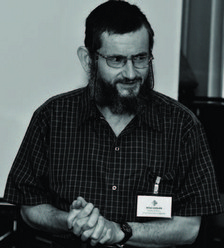 Miloš Zatkalik (1959, Serbia) is a composer and theoretician. He graduated in composition at the Faculty of Music in Belgrade with Vasilije Mokranjac and Rajko Maksimović. He continued his education attending courses in the USA and United Kingdom.
He is full professor and head of the Department of Music Theory at the Faculty of Music in Belgrade, and also teaches at the Academy of Arts in Banjaluka. He gave lectures in Canada, Norway, USA, Slovenia, and Germany.
Among his important works are: orechestral pieces Minas Tirit, What’s He to Hecuba, Of Saralinda, Xingu and the Duke Swallowed by Golem – a fable for large orchestra; chamaber works The Mad Carriage-Greeter from Ch’s, Lost fragmensts II, As if Nothing Had Happened; works for chamber orchestra Lost fragments, Dum incerta petimus; solo music (for flute, viola, cello, piano) and songs with piano accompaniment. His pieces were performed in Germany, Spain, Russia, Canada, and USA.
He published papers in national and international journals and magazines, dealing with different areas, such as relations between music and literature/linguistics, the analysis of the twentieth century music and psychoanalytical foundation of music analysis. He is the author of the first Serbian music analysis textbook in electronic form.
Zatkalik is a member of the Managing Board of Serbian Composers Association and of the Jury for the Mokranjac Award.
He also graduated in the English language and literature at the Faculty of Philology in Belgrade. He was engaged in professional translation.
What did, among other things, happen before the end of time. Messian didn’t write this. He probably wouldn’t have written it. Still, it is nice to imagine how this game with layered modes and rhythmical patterns could have served as the zero or minus first (fifth, nth) movement of the famed quartet, whose tribute is coming out only now, on the 104th anniversary of its composer’s birth.