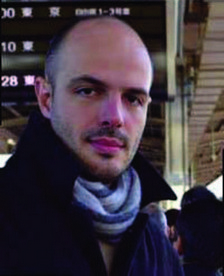 Đuro Živković (1975, Serbia/Sweden) comes from a non-musical family, however his parents inspired in him a love of art. His early interest in folklore, the Orthodox Church tradition and Byzantine music led him to develop a variety of compositional techniques such as polyrhythmic, improvisation, special harmony based scales, microtones, layer-polyphony (multiphony) and heterophony. His interest in the harmonic organization (after the year 2002) has resulted in a new approach to his composition process. Živković finds importance in the so-called harmonic field, the way that chords exist in coherence or in symbiosis with themselves, thus creating the genesis and harmonic path. His music is commissioned, performed, recorded and broadcast across Europe, Japan and North America, by leading soloists and ensembles. His music received the Swedish Grammy Award 2010 with Sonanza for the piece Le Cimetière Marin. He is also active as a teacher at The Royal College of Music in Stockholm.

The composition I Shall Contemplate… is an intimate, chamber music composition in the cantata form for voice and small ensemble. I use the improvisation technique, whether written down or not, to search for music freedom – that means contemplations on music and the order of things which tend to live in all-encompassing freedom and omnipotence of spirit.
“I shall contemplate each day the faces of the saints to find rest in their words.” (Antiphon of the Liturgy of the Hours)
“In silence we learn the secrets of this shadow that shines brighter than the most brilliant light in the blackest darkness.” (St. Dionysius the Areopagite – The Mystical ­Theology)