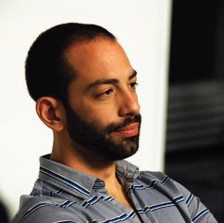 Draško Adžić (1979, Serbia) graduated from the Faculty of Music in Belgrade, at the Department of Composition and Orchestration, in the class of Isidora Žebeljan. He is currently attending doctoral studies at the same faculty and department, and works as a teaching assistant at the same time. His music pieces have been performed in Serbia, Macedonia, Croatia, Austria, the Czech Republic, Belgium, the Netherlands and the United Kingdom. He has taken part in significant European music festivals like Gaudeamus Music Week, ISA Prag–Wien–Budapest, Music Biennale Zagreb and BEMUS. He often composes for the theatre, TV and films, and his works of applied music have been heard at the following festivals: Berlinale, FEST, BITEF, Sterijino pozorje, MESS, Cinema City, and Maifestspiele Wiesbaden. In 2012 he received the Sterija Prize for original theatre music for the play Workers die singing, directed by Anđelka Nikolić. He has also performed as a pianist, singer and conductor, interpreting his own pieces and pieces of other composers. He is occasionally employed as the organizer of concerts of contemporary music.

Die Drehorgel (A barrel organ), for accordion solo, is music of an imagined barrel organist, the Austro-Hungarian settler, who lived in the nineteenth century in Serbia. The composition was written for Vladimir Blagojević.