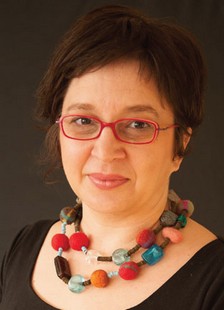 Jana Andreevska (1967, FYR Macedonia) earned her BA and MA degrees in composition at the Faculty of Music in Skopje, in the class of Tomislav Zografski. Her education as a composer includes numerous workshops in Europe and a study stay in the USA, with composers such as Louis Andriessen, Ton de Leeuw, Michael Nyman, François-Bernard Mâche, Eric Gaudibert, John Woolrich, Nigel Osborne, Glenn Hackbarth, Aleksander Radvilovich and others. She has been teaching at the Theory and Composition Department of the Faculty of Music in Skopje since 1995. Since 2008 she has been an artistic director of the festival of contemporary music Days of Macedonian Music in the European Composers’ Forum. Her music has been performed by renowned Macedonian and foreign ensembles such as Athelas Sinfonietta (Denmark), Moscow Contemporary Music Ensemble (Russia), Saxofonquadrat and Alliage (Germany), choirs Collegium Musicum (Serbia), Calliope Women’s Choir (France), New London Chamber Choir, and many others in Yugoslavia, Russia, Croatia, Slovenia, Bulgaria, the Netherlands, Austria, Slovakia, Ukraine, Moldova, Germany, Denmark, France and Great Britain.

“Am I a falcon, a storm, or an unending song?” (2006) is a piece written for a saxophone quartet commissioned by the Macedonian Composers’ Association. Inspired by the verses of the famous poet Rainer Maria Rilke from his Book of Hours, the entire piece circles around the delicately incorporated fragments of the 1st movement of Johann Sebastian Bach’s Solo Violin Sonata No. 3 in C major.

(I live my life in growing circles,
which move over the things around me.
Perhaps I’ll never complete the last,
but that’s what I mean to try.
I’m circling around God, around the ancient tower,
and I’ve been circling for thousands of years;
and I still don’t know: am I a falcon, a storm
or an unending song?).

So far, the piece has been performed by several ensembles on numerous concerts throughout Europe (the Dimov, Saxofonquadrat, Alliage, Axone), receiving many positive reviews: “It is magnificent with how powerful sound fantasy this composer born in 1967 lets herself be carried away by the images of the world of Rilke, and with a feeling for the sound possibilities of these four instruments transfers them into a new mystery” (Rafael Rennicke, 18 February 2011, Sudwest Presse).