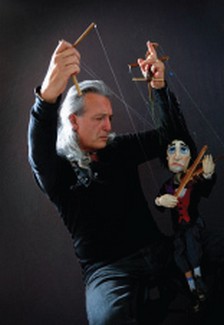 Bojan Barić (1955, Serbia/Finland) studied in Prague in the class of Václav Dobiáš (1973–7). Afterwards, in 1977 he founded a puppet theatre in Helsinki where he worked as a composer, actor, director and manager. Working as a director, he collaborated with Finnish television and theatres in Finland, Kenya and Serbia. He also founded a Centre for Puppetry where he has worked as an Art director since 2007. He lives and works in Helsinki where has been writing music for the theatre, films, television and the radio for the past thirty-six years of his career. He received the “Za dobrobit deteta” medal (“For the welfare of a child”) for children’s music and recognitions as the best animator of the technique of puppetry on the festivals in Sweden, Serbia and the Czech Republic. He was the recipient of the five-year grant (2006–2011) from the Finnish Ministry of Culture for composing new musical theatrical pieces.

In the field of concertante music I have always been interested in the relationship between the performer and the music text, space and technology, as well as their influence on the duration and the musical form. In the early creative period, in orchestral, chamber music compositions and compositions for solo instruments, main features of my compositions were the following: use of graphic notation, creating the balance between improvisation and performing freedoms and therefore freedoms in planning the music form, planning mise-en-scène events. I often used mathematics and technology as the material for improvisation and enrichment. The inspiration lies in an idea. Trigonometry follows a similar school of thought as well as the approach to the concert stage and concertante music.