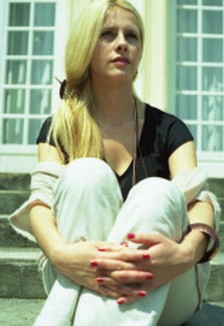 Jelena Dabić (1982, Serbia/Germany) studied music theory and composition at the Academy of Arts in Novi Sad with Zoran Mulić. She attended numerous courses and seminars in composition working with Wolfgang Rihm, Peter Michael Hamel (Hamburg), James Clarke (London), Pascal Dusapin (Paris), Frederik Durieux (Paris), Isabel Mundry (Zurich), Beat Furrer (Graz), Manfred Stahnke, Georg Hajdu (Hamburg), and many others. In 2007/2008 she was an assistant at the Academy of Arts in Novi Sad teaching Traditional Performance at the Group for Ethnomusicological Studies. She completed a two-year specialist studies programme at the Hochschule für Musik und Theater in Munich with professor Jan Müler-Wieland. She continued further education at the Hochschule für Musik und Theater in Hamburg (2012/13) in the field of multimedia arts and electronic music. Her works have been performed by renowned artists, such as Peter Neff, baritone, Monika Lichtenegger, soprano, S. J. Santana, countertenor etc. She frequently collaborates with Marcio Schuster (saxophone) and Kana Omori (percussion) so she has composed a number of pieces for this duo. Her short opera Spiegel Spiel (The Mirror Game) was commissioned by the Munich Biennale (Festival of the New Music Theatre) and performed at that festival in 2010. For the festival Young Euro Classic in Berlin she composed two pieces which were premiered in the Konzerthaus under the direction of conductors Heinrich Schiff (2010) and Lilian Isakadze (2011). She currently lives and works in Hamburg and writes a PhD thesis on contemporary musical theatre.

This piece was composed in 2004 and revised in 2013. A short and unpretentious piece, the form of the composition contains elements of the sonata form while the rhythmical and melodic components are inspired by popular music.