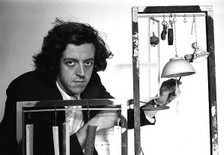 Cornelius Cardew (1936–1981, UK) received his musical education at the Royal Academy of Music in London (1953–7), where his teachers included Howard Ferguson (composition) and Percy Waller (piano). In 1957 he went to Cologne to study with Stockhausen, who employed Cardew as his assistant (1958–60) specifically to collaborate with him in the composition of Carré. He returned to London in 1961, where he took a course in graphic design; he worked intermittently in this field until his death. In 1964 he received an Italian government scholarship to study with Petrassi in Rome. He was elected FRAM (Fellow of the Royal Academy of Music) in 1966, and in 1967 was appointed professor of composition at the RAM. While in Cologne in 1958, Cardew attended concerts given by Cage and Tudor. The American avant-garde music he heard made a deep impression on him and was the catalyst for a series of ‘indeterminate’ compositions in the early 1960s (Autumn ‘60, Octet for Jasper Johns, Solo with Accompaniment, Memories of You). Throughout this period he was also active as an interpreter (piano, guitar) of contemporary music, in particular of the Americans, Cage, Feldman, Brown and Wolff, and his own music. From 1963 to 1968 there were two dominating and complementary activities in his artistic life: the graphic score Treatise, in which traditional notation is abandoned altogether, and the free improvisation group AMM. The latter part of the 1960s and the early 1970s similarly saw two parallel, complementary and all-consuming activities: The Great Learning (1968–70), and the Scratch Orchestra (1969–72), an ensemble devoted to the performance, composition, understanding and dissemination of experimental music, founded by Cornelius Cardew with Michael Parsons and Howard Skempton.In the last decade of his life he wrote a number of instrumental works, mainly for piano solo, but the majority of his compositions were political songs for specific occasions.

Paragraph 6 is a segment of the Great Learning (1968–70), a large-scale choral work (with a duration of approximately seven hours), in seven movements, based on one of the Confucian scriptures. It uses both traditional and graphic notation, conventional instruments and found objects, and involves trained and untrained musicians who sing, speak, drum, play stones and whistle, perform actions and gestures, invent games and improvise. It represents an important stage in Cardew’s development at a time when he was moving away from the purely aesthetic concerns of the avant-garde towards the recognition of the social and political roots of musical life.