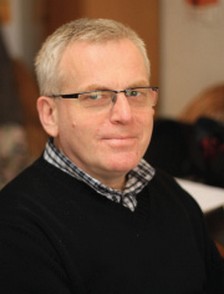 Nenad Firšt (1964, Slovenia) studied composition (under Dane Škerl) and violin (under Rok Klopčič) at the Academy of Music in Ljubljana and perfected his knowledge in international classes in Croatia, Hungary and France. He was a member of the Sebastian String Quartet and the president of the Musical Youth of Slovenia. Since 1988 he has been the artistic director and conductor of the Celje Strings Orchestra. More than 130 of Nenad Firšt’s solo, chamber and symphony compositions have been presented in concerts and festivals across Europe, North and South America, Asia and Australia, many of them are featured on 30 albums by renowned Slovenian and international artists and orchestras. He has received various prizes and recognitions, including the highest national cultural prize (Prešeren Fund Prize) in 2009 for his music opus. He has been the president of the Society of Slovene Composers since 2010.

Hip (eng.: Jiffy, Moment) is a short concert piece, consisting of motifs and sketches of improvisational character which are interrupted by dynamic virtuoso sections. It was dedicated to outstanding performers, the 4saxess Quartet, and first performed in September 2012.