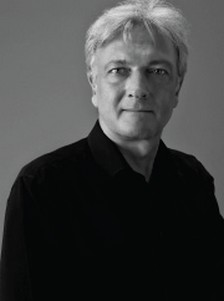 Kim Helweg (1956, Denmark) began composing at the age of 13 and made his professional debut in 1974. The first published work Hvidheden og Stilheden (The Whiteness and the Silence) from 1975, shows clearly which composers have influenced his formative years – namely John Cage and Penderecki. A chance encounter with American fusion-music drastically altered his course and led to an extended period of jazz/rock compositions. In 1985 and 1988 Helweg won the 1st prize for compositions made for The Danish Radio Concert Orchestra. In 1986 his anti-musical The Kreutzer Sonata (based on Tolstoy and Beethoven) – with both music and lyrics by Kim Helweg – won a prize at the European Broadcast Union in Monaco. Since 1988 Helweg has chiefly composed for classical ensembles, but still with a visible jazz/rock influence.

In the seventies I was playing in a fusion band mixing improvisation with composition using the fabulous new sound world from the analogue synthesizers. In this piece I will recall some of the musical ideas and sounds from that time and bring them up to date by using my present approach to musical composition. I will try to make a symbiosis between the spontaneous way of expression of the past and the later, more structured and reflected. And first of all to work with the old fantastic synthesizers and bring them back to life again together with the wonderful LP Duo.