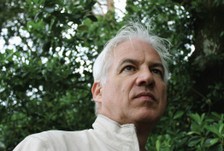 Chiel Meijering (1954, the Netherlands) has written a large number of compositions (over 800), mainly for small ensembles. A very strong characteristic of Meijering’s works is a large variety of styles. Without any difficulty, he seems to move between different musical worlds and genres and thus creates a different texture for each of his works. Some of them remind of pop, jazz or world music, others are written in a classical tradition or show avant-garde elements. Meijering is driven by spontaneity. All kinds of emotions and experiences that arise during a day, may directly flow into the composition he is working on. Sometimes he even uses accidents as a method and throws the dice for creating clusters. Meijerings works always have programmatic titles, sometimes funny or provocative. Examples include I Hate Mozart, or I’ve Never Seen a Straight Banana. Now that he has reached the middle of his fifties, Meijering’s titles – as well as his music – are experiencing a shift to the more romantic and poetic side Nightbeast Cry (for toy piano) or The house with paper walls (for viola and harp). Meijering has found a large public not only in the Netherlands, but also on international stages. His music shows high artistry and still remains catchy and accessible for a broad audience. Even Queen Beatrix of the Netherlands outed herself as a huge lover of Meijering’s music, when she ordered one of his compositions for a festive concert on the occasion of her 60th birthday. Without any doubt, Meijering can be described as one of the most popular and famous voices of contemporary Dutch music.

Rondo form is one of my favourites. Rondo form involves the repeated use of a theme with episodes, each involving a new theme, intervening among the repetitions, like this: A B A C A D A … Sometimes the A section could change slightly, especially at the very last time it comes back. Usually the episodes (B, C, D, etc.) are in a different key from the tonic.