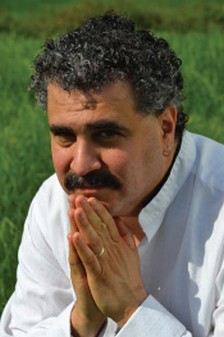 Marc Mellits (1966, USA) studied at the Eastman School of Music, Yale School of Music, Cornell University, and Tanglewood. His unique musical style is an eclectic combination of driving rhythms, soaring lyricism, and colorful orchestrations. Mellits often is a miniaturist, composing works that are comprised of short, contrasting movements or sections. Mellits’ music has been played by major ensembles across the globe and he has been commissioned by groups such as the Kronos Quartet, Orpheus Chamber Orchestra, Duo Assad, Eliot Fisk, Debussy Quartet, Musique En Roue Libre (France), Fiarì Ensemble (Italy), the Society for New Music, Syracuse Symphony Orchestra. Additionally, Mellits’ music has been performed, toured, and/or recorded by members of the Detroit Symphony, Atlanta Symphony, Boston Symphony, Minneapolis Symphony, Brooklyn Philharmonic, Chamber Music Society of Lincoln Center, and the American Modern Ensemble, among many others. On film, Mellits has composed numerous scores, including the PBS mini-series Beyond the Light Switch which won a 2012 Dupont-Columbia award, the most prestigious award in documentaries. Mellits also directs and plays keyboards in his own unique ensemble, the Mellits Consort. He was awarded the prestigious 2004 Foundation for Contemporary Arts Award. On CD, there are over 40 recorded works of Mellits’ music that can be found on Black Box, Endeavour Classics, Cantaloupe, CRI/Emergency Music, Santa Fe New Music. Marc Mellits is on the music faculty of the University of Illinois-Chicago where he teaches Composition and Theory.

Red is comprised of six short movements, each relating to each other much like a baroque suite (I Moderately funky; II Fast; III Moderate, with motion; IV Slow; V Moderate, with motion; VI Fast, obsessive, red). The overall structure of all six movements together forms the pacing and strategy of the music. Both Marimbas remain interlocked to one another and create a music fabric by combining their sonorities in tightly woven patterns. There is no moment in the work where one instrument could survive without the other. Together, these two ‘brothers’ work hand in hand to form a single musical mind. Red was composed entirely in Bucharest, Romania, in the summer of 2008.