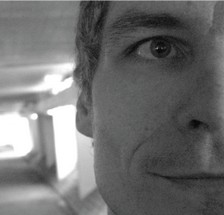 Vladimir Pejković (1976, Serbia) – In his work, besides chamber music, music for the theatre and film holds a significant place. He has composed music for more than 100 plays of different genres. He made the hiphopera Land of Happiness, he was the co-author on the stage/music project Tesla – Total reflection and made the official score for the restored first full feature Serbian movie from 1910. Besides that, he collaborates with bands, works in the theatre as a music supervisor, sound designer and a performer (piano, bass, guitar, and live electronics). He has been involved in productions all over Serbia, several times in Italy and Slovenia. For his works he has received numerous awards.

This somewhat illustrative title is related to, above all, the very process of creating a composition. The idea to divide the authorship between two composers, but also performers; is equal to the interaction taking place in any author ensemble, meaning: band. In this case, the sections the composers submit are written down, they are determined according to invoice, character and colour (the closest explanation possible) and further on, performers can influence their order, duration (repetition), even the change of timbre which also gives it an improvisatory character… Therefore, Reciprocity can sound different every time and remains an open form… Dedicated to LP duo.