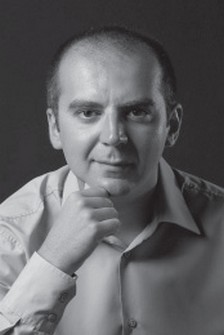 Pande Šahov (Macedonia/UK) studied with Risto Avramovski and Tomislav Zografski in Macedonia, before continuing at the Royal College of Music in London, where he studied with Julian Anderson. This autumn, he is completing his PhD at the Royal Holloway University of London, working under Philip Cashian’s supervision. His music has been performed by Lontano, Ixion, Chroma and Composers’ Ensembles, Bournemouth Symphony Orchestra as well as Macedonian and Sofia Philharmonic orchestras. Recent premieres include Meier Settings for sixteen voices (New London Chamber Choir under direction of Clement Power) and Songs of Love and Death for soprano, harp and strings (Gonce Bogoromova and Vesna Stanoyevska with the soloists of the Munich Chamber Orchestra). Pande lives in England and works as a lecturer at the Royal College of Music in London.

The initial theme of Urban Rains was inspired by my journeys on the London Underground network. I wanted to capture the urban atmosphere of the everyday life of commuters. It also occurred to me that as soon as I exited an underground station, I was often greeted by persistent rain. Thus, for a while, the working title of the movement was (T)rains. November was inspired by the bleak and mysterious atmosphere of the Surrey countryside on a rainy November day. The initial soprano saxophone melody ascends to the highest register and sounds somewhat optimistic, although it is rhythmically hesitant and fragmented. These motifs trigger development in different directions, sometimes establishing a persistent ostinato. Oro is my own ‘version’ of the popular folk circle dance. This movement uses no quotes from an authentic folk dance or song. Melodic sections alternate with sections built on repeated, accented chords.