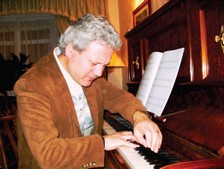 Tomas Simaku (1958, UK) began his composition studies at the Tirana Conservatoire. In 1991 he moved to England and gained a PhD in Composition from the University of York (1991–96). He was theLeonard Bernstein Fellow at Tanglewood, USA (1996) studying with Bernard Rands, and a fellow at the Composers’ Workshop, California State University (1998), with Brian Ferneyhough. Simaku’s music has been reaching audiences all over Europe and the USA for more than two decades, and it has been awarded a host of accolades for its expressive qualities and its unique blend of intensity and modernism. Prestigious awards include the Serocki International Competition (2004), a fellowship from the Arts & Humanities Research Council in London, and a British Composer Award for his Soliloquy V – Flauto Acerbo, which the judging panel described as ‘visionary and entirely original’. Most recently, Simaku was awarded the first prize in the International Competition for Lutosławski’s 100 Birthday.

This piece was commissioned by Christopher Orton with funds provided by the BBC Performing Arts Fund. As the title suggests, the piece belongs to a series of works for solo instruments. After the première of Soliloquy I at the 2000 ISCM Festival, the idea of composing a cycle of solo pieces – the aim was to create different characters within the same protagonist who ‘narrates’ in different languages, as it were – materialized itself. So far, this is the fifth work in the series (the first three are for string instruments, and the fourth is for Bass Clarinet). With each piece, the soloistic idea operates on a different instrumental canvas and is elaborated according to the expressive qualities and the technical potentiality of each instrument. In this work, the linear contours based on ‘white modality’ but constantly ‘surrounded’ by chromatic and microtonal inflections, as well as the contrapuntal dynamism and the variety of textural formats stemming from it, are at the heart of the musical discourse. The idiosyncratic quality of this piece is to be found perhaps in the second part of the title, Flauto Acerbo!