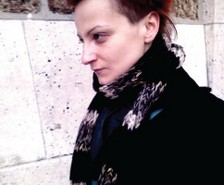 Jasna Veličković (1974, Serbia/the Netherlands) is a composer and performer based in Amsterdam. Her recent works have focused on sound extension of traditional instruments and the creation of tools that shape the transformative sound potential of the electromagnetic field. Her research activities have been supported by the institutions such as: STEIM Amsterdam, CRMMIT Montreal, and CMMAS Morelia. She completed her composition studies in 1999 at the Faculty of Music in Belgrade with Srđan Hofman. Since 2001 she has been studying at the Royal Conservatory in The Hague with Louis Andriessen, Gilius van Bergeijk and Clarence Barlow. Her works have been performed at the festivals such as ISCM World Music Days, Music Biennale Zagreb, Gaudeamus Music Week, the Netherlands Festival, Ring Ring. Her composition Last Song was nominated for the Dutch Toonzetters Award (2011) and received a “recommendation” at the Unesco Rostrum of Composers (2011). She won the 28th Irino Prize (2007) in Tokyo.

Oxygen(Kiseonik)was commissioned by the Gaudeamus Music Week in the Netherlands and it had its premiere on 12 September 2012, when it was performed by the ensemble ECO (European Contemporary Orchestra), conductor Raoul Lay. The new version which was especially adapted for the ensemble Studio 6 includes the improvisation elements characteristic of this ensemble. Oxygen belongs to a series of pieces which explore specific sound situations based on resonance and sound deconstruction. The composition was financially supported by the Fund for Performing Arts (Fonds Podiumkinsten).