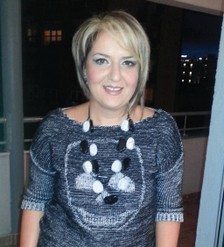 Jasna Veljanović (1980, Serbia) graduated in 2003 from the Ukrainian National Tchaikovsky Academy of Music, Department for Composition, in the class of Genadiy Lyashenko. Her graduation work Concerto for Piano and Orchestra was performed by the Symphony Orchestra of the Ukrain Broadcasting Company. She took her Master’s degree in 2007 at the Faculty of Music in Belgrade in the class of Vlastimir Trajković, with a composition titled Five Songs for Mezzo-soprano and Orchestra on the Verses of Aleksander Blok. She is currently attending specialist academic studies at the Faculty of Music in Belgrade (Music Theory Program), under the mentorship of Professor Sonja Marinković. Her oeuvre consists of chamber (for solo instruments and ensembles) and symphonic works. Lately, she has been particularly occupied with chamber compositions for a specific ensemble – Duel i romansa (Duel and Romance) for flute and accordion, Interrupted Passacaglia for flute, oboe, accordion and cello, A Dream Within A Dream for soprano and flute, Nemirne misli u noći (Restless Thoughts in the Night) for flute, oboe, saxophone and cello. She is a teaching assistant at the Music Department of the Faculty of Philology and Arts in Kragujevac.

Fantasy to the poem “Nemam više vremena” (I have no more time) by Desanka Maksimović, for accordionsolo

The composition Fantasy to the poem “I have no more time” by Desanka Maksimović was inspired by a poem from the collection of poems which bears the same name and which was published exactly forty years ago. In terms of composition technique, it was written bimodally and contains several quotes – fragments from famous compositions by Vivaldi, Mozart, Mussorgsky and Barber. Aesthetically, the composition represents a reaction to the present age where general knowledge as well as the glorification of the mundane and banal, do not leave much time for contemplation and questioning. In contrast, in the poem the poetess Maksimović tries to find relief from the thoughts on the “everlasting and incomprehensive” for at least a second, looking for an escape in simplicity which does not exist and which is fictional in both cases. The instrument this piece was written for – the accordion – contributes to the creation of the composition’s general image. Created in the nineteenth century, the instrument found its place in artistic music much later and it is still fighting for it even today. Even though there is no shortage in contemporary original repertoire for the accordion, it draws from its artistic past owing to arrangements and transcriptions of pieces written for solo instruments, chamber ensembles and symphony orchestras, which is why the quotes in this composition sound naturally even though they have only been adjusted to suit this instrument.