Ensemble Studio 6 was formed in 2012 when its founders Nenad Marković and Milana Zarić returned to Serbia after spending several years in the Netherlands, Germany and Switzerland where they completed their higher education and engaged in professional activities in the field of contemporary music. Together with other musicians of similar experience they formed this ensemble which advocates the implementation of European tendencies in contemporary music within the framework of national artistic practise and education. This ensemble’s first performance echoed in the domestic professional and general public as the first in a series of concerts and live performances given from Studio 6 of the Belgrade Radio’s 3rd Programme – and as a tribute to this event the ensemble took the name Studio 6. Considering that the ensemble Studio 6 provides diverse combinations of instruments (trumpet, harp, recorder, accordion, cello, electronics…), its programs are designed to include the works of acclaimed authors as well as little performed experimental pieces by composers of various generations. The objective of Studio 6 is to creatively influence the dialogue between listening, performing and creating in contemporary artistic practise. In other words, this unusual, modular and dynamic ensemble is dedicated to nurturing the sound space at the borderline between acoustics and electronics, determinacy and indeterminacy, music notation and performative decision. Out of already conducted and planned activities of Studio 6 in the 2013/2014 season, the performance at the 45th Bemus stands out where they performed a 50-minute piece Songs of wars I have seen by Heiner Goebbels who was present, and conducted by Sian Edwards. Afterwards, the ensemble Studio 6 organized regular concert series in Novi Sad and Kragujevac; the international seminar for composers in collaboration with David Fennessy from the Royal Music Academy in Glasgow and the Institute for culture in Vojvodina; performance at the 22nd International Review of Composers in Belgrade; continuation of a long-term collaboration with the British composer Richard Barrett which began in April 2013; CD releases; as well as premiere performances of compositions by more than 20 Serbian and foreign authors. 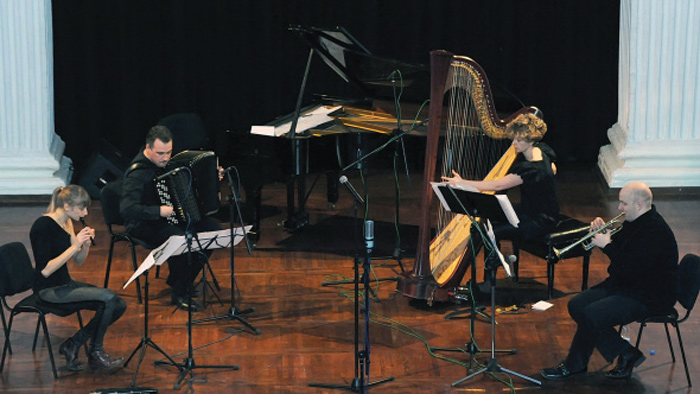