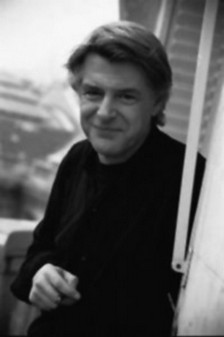 Georges Aperghis (1945, Greece/France), since settling in Paris in 1963, he has led an original and independent career, dividing his time between instrumental and vocal compositions, musical theater and opera.

In 1976 he founded a musical theatre workshop, Atelier Théâtre et Musique (ATEM). This organization allowed for a complete renewal of his compositional activity, making use of musicians as well as actors: his shows are inspired by everyday life, events in society are transformed into a world of poetry, a world often absurd and satirical – Récitations (1978), Jojo (1990), Sextuor (1993), Commentaires (1996).

Two of his works, composed in 2000, have achieved a wide success throughout Europe: Die Hamletmaschine-Oratorio, based on a Heiner Müller text, and the show Machinations, a commission by IRCAM, which was awarded a Grand Prix by the French Composers’ Society.

In 2004 he composed Dark Side for the Ensemble Intercontemporain and Marianne Pousseur, with extracts from Orestie by Eschyle (Prix Salabert), and a new opera Avis de tempête, created in November 2004 at the Lille Opera with the Ictus Ensemble, Donatienne Michel-Dansac, Johanne Saunier, Romain Bischoff and Lionel Peintre (Grand Prix de la Critique 2005). In 2006 Avis de tempête was presented in Paris for Festival Agora/Opera de Paris.

Compagnie, for cimbalom, harp and percussions was written in 1985 as a part of Triptych cycle. Triptych is a story of a couple that speaks of longing, compassion and memory. Three pieces represent three distant moments of one journey that symbolizes hidden inner life. Compagnie is a central piece of the cycle. In it the voices of the first (solo percussions) and the third (solo harp) piece get together, synchronize and mutually supplement. This is especially evident in the choice of instrumentation – cimbalom could be understood as a symbol of balance, instrument of communication between the male and female principles.