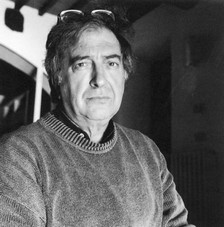 Luciano Berio (1925–2003, Italy) received his first lessons in music from his grandfather and father – organists and composers. After the war he entered the Verdi Conservatory in Milan, studying at first with Paribeni (counterpoint and fugue), then with Ghedini (composition) and Votto and Giulini (orchestral conducting). He earned his living as an accompanying pianist, meeting this way his first wife, American singer Cathy Berberian with whom he was to explore the possibilities of voice in numerous works, the best known being Sequenze III (1965). In 1952 in Tanglewood he studied with Luigi Dallapiccola for whom he had a great admiration as could be seen in the dedication of Chamber Music (1953). In Basel, attending one of the conferences devoted to electroacoustic music he met Stockhausen, composing after that his first pieces for tape (Mimusique no.1). In Darmstadt Berio met Boulez, Pousseur and Kagel, and his personal response to serialism he would create in Nones (1954). He would return to Darmstadt more than once, teaching there in 1960; still he would keep distance from the dogmatic ambience of Darmstadt. With Bruno Maderna he founded in 1955 Studio for Music Phonology at the Milan RAI. From these researches Thema (Ommagio a Joyce) emerged in 1958. Passionately interested in instrumental virtuosity he started in 1958 his series of Sequenze, which he finished in 1995. From 1960 on he taught composition in the USA at the Summer School in Dartington, Mills College, Harvard University, Columbia University, as well as at the Julliard School of Music where he founded in 1967 Juilliard Ensemble specialized in contemporary music. Upon his return to Europe in 1972, Boulez invited him to manage the department of electroacoustic music at IRCAM (1974-1980). In the 1980’s Berio realized two major operatic projects  – La Vera Storia (1982) and Un re in ascolto (1984), on libretti by Italo Calvino. Apart from his creative activities, Berio was constantly engaged at various Italian and international institutions. His international fame was acknowledged with numerous prizes, awards and honors, such as Leone d’Oro of the Venetian Biennale (1995) or Premium Imperiale (Japan, 1999).

Opus Number Zoo, for wind quintet, is a short occasional work written in 1951 for an audience of young people, and revised in 1970. The work is composed of four movements, each corresponding to a text read by the musicians, isolated or together. The four poems were written by Rhoda Levine.