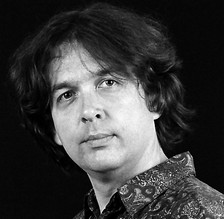 Ivan Božičević (1961, Serbia), composer, organist, pianist and arranger. He graduated and obtained his M.Mus. degree in composition from the Belgrade Faculty of Music (prof. Aleksandar Obradović). He attended Summer Courses of New Music in Darmstadt (1982, 1984). Božičević studied organ at the Hochschule für Musik in Frankfurt (prof. Edgar Krapp) and finished his studies there in 1988. He specialized in early music at courses in Salamanca (Guy Bovet, Montserrat Torrent). He performed in Croatia, Serbia, Germany, Hungary, Switzerland, Spain and the USA.

Until 2001 Ivan Božičević was assistant professor at the Belgrade Faculty of Music and Academy of Arts in Novi Sad. From 2002 he is a free-lance artist stationed in Split (Croatia). His discography includes eleven editions, while his pieces were performed in Serbia, Croatia, Sweden, Germany, UK and USA.

Recent awards: ArtsLink Award for 2009 – realized as a two-month’ visit to the USA where he made numerous presentations, workshops, concerts as well as two authors’ concert in Houston. That year, American pianist Kathryn Woodard recorded a CD entitled Journeys for Sonic Crossroads including Sotto voce by Ivan Božičević. Walton Music has published his piece Pastir dobri for female choir and piano. At the International Contest of the London Schubert Players, Marittimo for trumpet, piano and string quintet was selected and performed (2010).

Tracing – in Quest for Simplicity (2010)
Almost all of my recent pieces are manifestly anti-virtuoso and meditative. To follow the track of the overwhelming, genuine simplicity, to rediscover the misplaced directness.

Tracing could be played in various combinations of solo instruments, so that reading/drawing traces always something different, as it happens to be in renaissance or jazz practice.

The score consists of one harmonic instrument and soprano, alto and tenor melodic instruments (one of each). The selector of this Review and the composer have decided that in Belgrade the instruments used should be piano, flute, violin and violoncello.