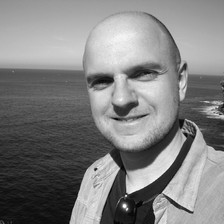 After spending several years (1999–2005) teaching Music Forms at the Mokranjac Music School, he became assistant at the Department of Music Theory, Belgrade Faculty of Music.

From 2007 he is the selector of the International Review of Composers.

He was awarded Mokranjac Award (2005) for When Curtain Rises Seven Times for symphonic orchestra.

The Great Little J.(Veeelika Jelenče) for marimba is a small part of the composer’s doctoral project devoted to the instrumental theater. The marimba (called Jelenče) is one of the characters from the composer’s theater story.  By its music Jelenče presents itself as a cheerful and hilariously smiling character, full of optimism and joy of living, laughter and play, character that is capable of making children laugh in an instance. Its character could connect Jelenče to the form of cartoon.

Three Little Absurds(Tri mala apsurda) were written on a commission from the Belgrade trio Timbre during the summer of 2007. I tried to transfer various, absurd situations from everyday life into an absurd treatment of the trio instruments. Thus, for instance, the flute assumes the role of the bass, the viola provides harmony and the harp is entrusted with melody. Furthermore, the absurdity influenced the form, articulation, and relations of dynamic levels… While composing this piece I had in mind the shortest absurd drama by Eugène Ionesco – “Les Salutations” written on two pages only.