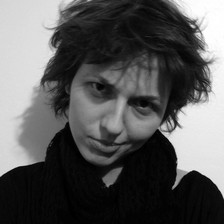 Milica Đorđević (1984, Serbia) graduated in composition from the Faculty of Music in Belgrade, where she also specialized in Sound and Music Recording and Production. With special recognitions, she finished her postgraduate studies at the Conservatory of Strasbourg, and continued further education at the Institute of IRCAM in Paris. At the moment, she is working on her doctoral thesis in Dresden and Berlin.

The works of Milica Đorđević are classified in the archive library of The Paul Sacher Foundation in Basel.

GREY (SIVO), for alto flute, bass clarinet, viola, cello and piano, was performed for the first time in 2005 by the ensemble on_line_vienna during The International Summer Academy Prague-Vienna-Budapest in Austria. The composition was awarded the first prize ISA 2005.