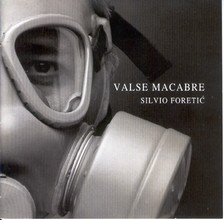 Silvio Foretić (1940, Croatia) spent his childhood and adolescence in Sarajevo and Osijek. After his first compositional attempts, he began to study composition with Milko Kelemen at the Music Academy of Zagreb, in 1956. During his studies he worked as a journalist, orchestral performer, ballet and opera rehearser, opera conductor, and also as a full time pianist and composer at the satirical theater Jazavac (today Kerempuh). In 1963 he founded the Ensemble for Contemporary Music, and three years later he moved to Cologne, where he continued to study composition with Alois Zimmermann and electronic music with Herbert Eimert. He specialized in composition with Karlheinz Stockhausen, and was the associate and assistant of Mauricio Kagel. From 1974 to 2006 he taught at the Folkwang-Hochschule in Essen and Duisburg. There, in 1982, he founded the ensemble Fin de siècle – fin de millénaire with who, during the twelve years of activity, he performed about fifty concerts of contemporary music. He is also the founder and longtime president of the Croatian Cultural Association Colonia Croatica in Cologne. He was a member of the Board of the Cologne Society for New Music, for several years. He works as a composer, songwriter and performer (conductor, pianist, singer), mostly of his own works.

Valse macabre, for voice and salon orchestra, was created upon an invitation from Westdeutscher Rundfunk (WDR) in Cologne, on the occasion of the thematic program called Tänze. It is interesting to note that, on the same occasion, the works of Luciano Berio (Pas de quoi) and Mauricio Kagel (Tango alemán) were also premiered.

The text of the composition is related to the author’s series La merde de siècle, and addresses the problem of environmental pollution. Although it was written thirty-two years ago, this work is still very actual (Foretić adds “unfortunately”) and seems it will remain so for a long time. In all previous performances the vocal part was rendered by the composer himself, who also was, in most cases, the conductor. However, since the composer lost his voice, the composition has not been performed for nearly fifteen years (although a compact disc edition was published). Therefore, for the composer (who tonight sits passively in the audience) tonight’s performance has, as he said, the meaning and charm of a premiere.